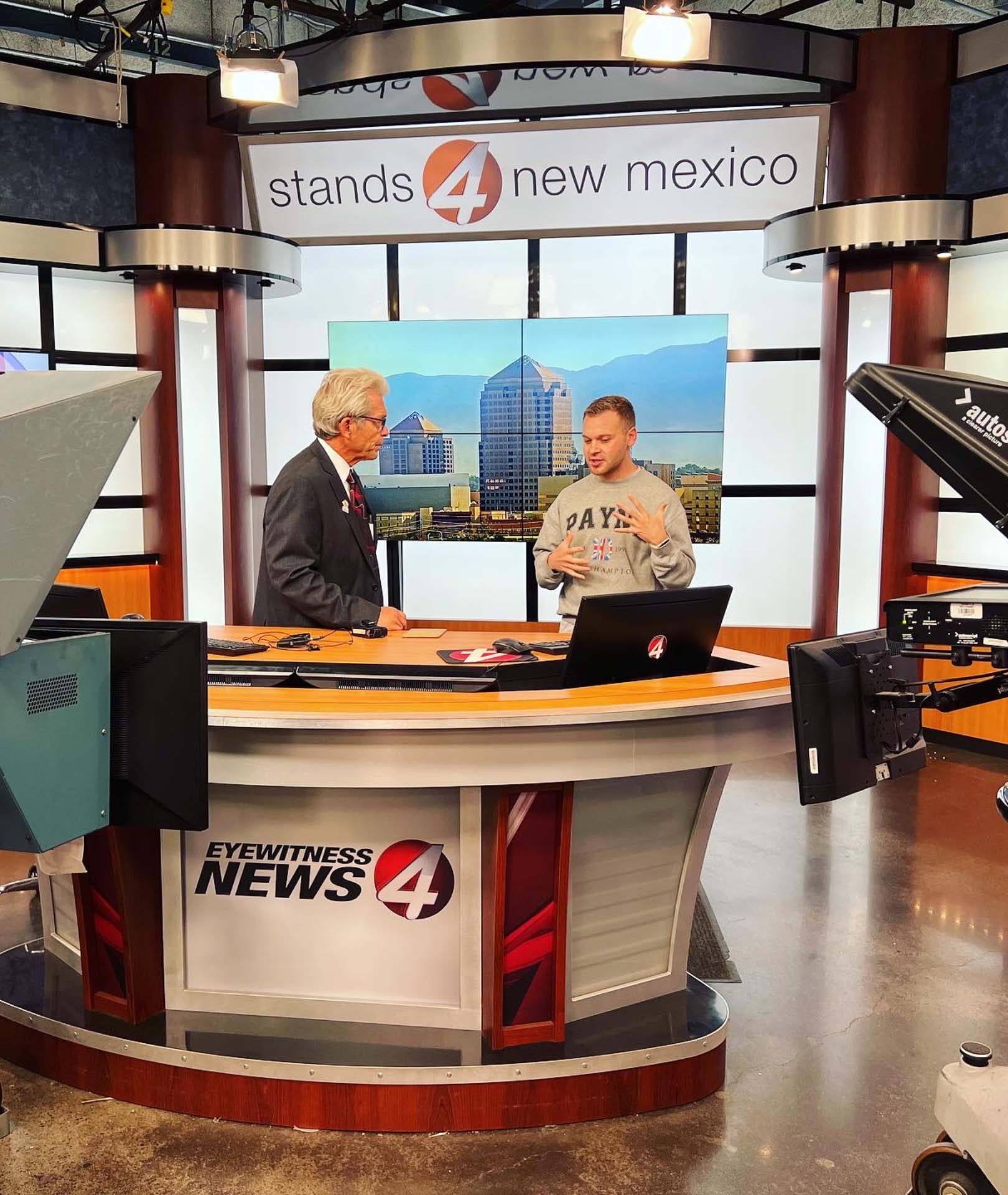 Steve Stucker is an American journalist, serving as the weatherman on NBC’s KOB4 Today which airs weekdays in Albuquerque, New Mexico. Steve has been in TV for over three decades, and was voted favorite meteorologist and/or Favorite TV Personality for 17years in a row by readers of Albuquerque Magazine. Steve has also worked with many nonprofit groups, schools, and churches. He is an Associate Pastor at his church and runs the non-profit organization Beds4Kidz, providing beds to those in need.

Throughout my conversation with Steve, it was clear that he exemplified many virtues – joy, magnificence, courage, friendliness, among them. I asked Steve where he thought that came from. He told me this story: “Growing up, my family was financially poor but spiritually wealthy. Both my parents were high school dropouts, but they were very good parents. The greatest story to me about my childhood is probably this: When I was a boy I wanted to be a baseball player. Never mind the fact that I was so terrible I was never put in for a single pitch. Just before the start of my 2nd season, the coaches realized that they had to pay a fee to register for the league. They were high school kids who didn’t have the money – so they were going to cancel everything. My parents didn’t have a dime, but they did have determination. They called up all their friends, and organized a dance and sold raffle tickets to raise money. We didn’t just pay the fee to enter the competition, we got new gear. It was great. They set a great example for me.”

“I was basically a party boy in college. I was about to drop out because I didn’t have money when a friend told me he was going to be on the radio. I listened to him when he went on, and he turned out to be so bad I said to myself ‘I could do that better!’” This is Steve’s story about how he got started in TV – which really began with him getting started in radio. Steve has a story for everything, and he admits that this (and his ability to talk) would eventually lead to his success on the big screen. “Growing up I always had favorite DJs and favorite weathercasters... So when we were playing sandlot baseball, I started to pretend to be the baseball announcer... And it evolved naturally from there.”

SOMETIMES ONE MORE DAY IS ALL YOU NEED

I asked Steve what his 20-year-old self would think about him now, he replied: “I think he’d be satisfied with overcoming a bad start. I’ve had several addiction problems, I was always drinking and smoking pot in college – it really was an addiction for me, I struggled to quit. It wasn’t until I was in my late 20’s that I was able to really begin overcoming all that, but that wasn’t the case for my brother who also struggled with addiction. He did harder drugs than me, was an addict for about seven years and quit cold turkey, but died about six years after due to complications from his earlier drug use... There were two different periods in my life when I was very suicidal...and I’m so grateful that I got through just one more day at a time, because I’d go on to discover all my life had in the future, that I couldn’t see at that time.”

WHAT HIS FUTURE SELF WOULD ADVISE HIM:

“Take good care of yourself, physically, mentally, and especially spiritually. And as you do that, you’ll be drawn to take good care of others...which is even more important. Always strive to do the right thing, in the right way, for the right reasons.

“That I’m always happy and smiling – just ask my wife and kids.” Steve has gone through his share of hardships...but he never fails to make you laugh! (Note: Steve told me about the time he went to the carwash and someone told him ‘you’re so nice on TV but you’re always in a bad mood when I see you’ - to which Steve replied: “I’m sorry, I guess I’m in a bad mood because I have to pay $15 to get my car washed!”) He says it was a good reminder that others are always watching, hoping you will be a good example.

WE CAN AGREE TO DISAGREE AND STILL BE FRIENDS

This is what Steve told me he thought the world was really missing right now – and I couldn’t agree more.

“Sometimes life can be overwhelming. Sometimes you’re committed to so much you get into a position where there’s no way you can’t let someone down.”

NO MATTER WHO YOU ARE, YOU HAVE A PURPOSE

I asked Steve: if you were on your last news broadcast, what message would you want to leave people with? His answer: “No matter who you are, you have a purpose for being here, and you can make a difference whether you know it or not... I just did a funeral for the matriarch of a big Hispanic family. She’s not famous – but she made an enormous impact on the lives of others. One thing she did that was terrific was she donated a bed to us. Her husband was hit by a drunk driver years before, and she was his caretaker for a number of years. She had kept his bed for sentimental value, but when she heard we needed one for a 12 year old girl with Spina Bifida, she gladly donated it. That turned out to be the origin story of Beds4Kidz, which eventually led to over 15,000 people getting free beds!” I loved this story, and it was so cool that Steve’s experience reaffirms one of my biggest convictions: that we all affect one another - and we can change the world with a single action.